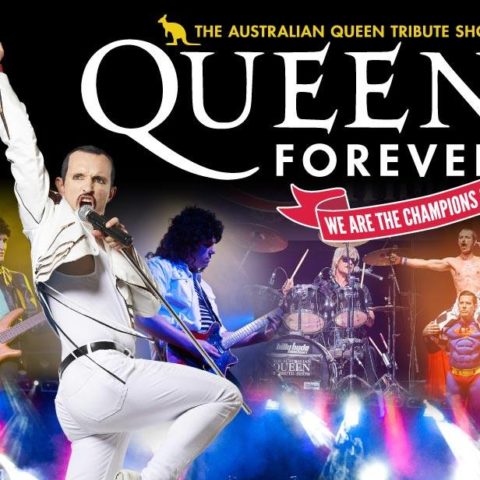 QUEEN Forever recreates the music and performance of Queen – the British rock band whose fusion of heavy metal, glam rock, and camp theatrics made it one of the most popular groups of the 1970s.

The essence of Queen is captured perfectly with authentic costumes, a stunning portrayal of Freddie Mercury by Gareth Hill, all the amazing guitar solos of Brian May and ground-breaking rock harmonies, in a stage show with state-of-the-art sound and lighting that will blow you away. Queen Forever will perform all Queen’s biggest hits including Crazy Little Thing Called Love, Radio GaGa, We Will Rock You, We Are The Champions, You’re My Best Friend, Another One Bites The Dust, Fat Bottomed Girls, Don’t Stop Me Now, Somebody to Love, Killer Queen, and many more, and of course, Bohemian Rhapsody.

Queen Forever is as close as you can get to the real thing.

“Queen Forever is the best Queen Tribute you will EVER experience”

“Loved every part of the show, you do Freddie a great honour with your exacting impersonation of a demanding talent”

“Queen Forever are so true to Queen it is amazing”

Prepare to be blown away with the magic that is Queen Forever.